While the robocall epidemic continues to grow, consumers are searching for ways to protect themselves against annoying and often fraudulent calls. To examine this issue in depth, First Orion, the leading provider of phone call transparency solutions, commissioned a survey of 5,000 mobile phone users* and found carriers may be the key to stopping the tens of billions of unwanted calls consumers receive each year.

With nearly half of all mobile calls projected to be from scammers this year, it’s unsurprising that 9 in 10 respondents feel unsolicited calls are an annoyance to them. Roughly 84% of those surveyed, when making a choice on selecting a mobile carrier, would be more inclined to select a carrier that automatically identified telemarketing and scam calls and offered options to stop them, and 56.4% of respondents would leave their current mobile phone carrier for one that offered features to better block or identify incoming scam calls.

As the robocall issue gains more awareness, consumers and lawmakers have started looking to carriers for intervention. This week, the Federal Communications Commission proposed new actions that would allow carriers to block suspicious calls by default and automatically opt-in subscribers to the carriers’ call protection services. According to this new survey, almost half (48.7%) believe it is their carriers responsibility to protect them from scam calls, but only 29.3% of respondents said their carrier currently offers these features.

Consumers are getting more robocalls than ever and as this continues to climb they are looking to their carriers to solve the problem. Many are frustrated with their current experience and are making decisions about which carriers will serve them best. They are ready to make a move and are looking to see which solutions will best protect them, even if it means leaving their current carrier behind.

*First Orion regularly conducts consumer surveys around call protection.  In July 2018 & December of 2018, First Orion commissioned a survey of over 5,000 mobile subscribers in the US market to better understand their scam call experiences, their satisfaction with their mobile carrier’s provided solutions, and their expectations of what their carrier should do to protect them. 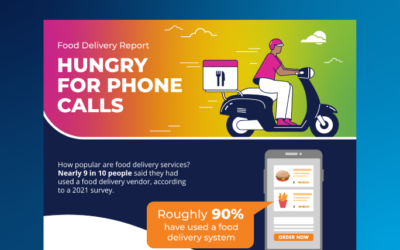 As food delivery prospers, there are ways it fails as well. Read top insights into food delivery customer and driver communication needs. Invest In Your Clients: Top Insights into Communication Preferences for Financial Consumers When customers shop for insurance, they’re looking to work with a company that’s fair, friendly, but most importantly,...