Unwanted calls are a major nuisance in Brazil, according to a recent survey sponsored by First Orion.

Mobile Time, a news site specializing in the coverage of the mobile industry, and Opinion Box recently completed an extensive survey of Brazilian mobile phone users. The study sought to capture the size and scope of the problem of unwanted calls, in addition to the measures taken by Brazilians to overcome the problem. With over 2,000 responses, the survey revealed that scam calls are a significant issue and that more than one-third of those surveyed would be willing to pay for a service that mitigates unwanted calls.

3 Key Findings from the “Unwanted Calls In Brazil” Survey 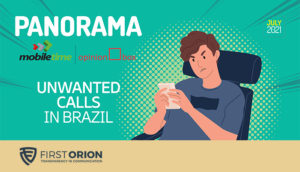 Nearly every survey respondent said that they’re bothered by unwanted calls on their telephones in at least one of four categories: telesales, info collection, scam, and robocalls. Many of them would switch carriers for better service to protect them.

Download a FREE copy of the “Unwanted Calls in Brazil Survey”

“Confidence in phone calls must be regained, recommends President of First Orion” In an interview with Mobile Time, First Orion President Jeff Stalnaker addressed questions about unwanted calls in Brazil and how it compares to the United States, in addition to how the U.S. government has taken steps to help consumers. He was also asked about the problem of people not answering their phones due to their wariness about the caller’s intentions. Stalnaker acknowledged that this is a universal problem for mobile phone users:

As a consequence of unwanted calls, many Brazilians simply no longer answer calls from unknown numbers. How can brands and operators deal with this problem?

“People no longer answer calls unless they know who is calling: this happens anywhere in the world. Unfortunately, this behavior causes the consumer to miss some important calls. While we fight against spammers on the one hand, we are also dedicated to providing the consumer with complete transparency about the calls to be able to decide whether to answer them or not while the phone rings or vibrates. We call this solution ‘Branded calling’ … Even if you don’t answer, you’ll know who called and the reason for the call, and you can discuss the matter later, even if on another channel. In this way, the purpose of the call is achieved, restoring confidence and power to voice calls, as well as adding value to mobile operators. ”

Founded in 2008, First Orion is headquartered in North Little Rock, Arkansas, and has offices in Renton, Washington; London, England; and Dubai, UAE. In 2020, First Orion opened offices in Sao Paulo and Porto Alegre.