bl
The new PrivacyStar app for iPhone gives users more control over their phones and provides three levels of protection, including:

With the introduction of iOS 10 and the CallKit API feature, First Orion enables iPhone users to protect themselves and preserve their privacy. This service has previously only been available to Android users until this iOS update.

U.S. consumers are harassed by over 30 million spam calls a day and First Orion will now give iPhone users the ability to block unwanted calls or texts, and even file a complaint directly with the Federal Trade Commission (FTC). In fact, First Orion’s PrivacyStar is the leading source of call complaint data to the FTC and has filed 31% of all complaints, according to the recent FTC Consumer Sentinel Network Report.

“The PrivacyStar app currently blocks millions of nuisance calls and now iPhone owners can enjoy what Android users have benefited from for some time,” said Rob Sewell, VP of Products and Service at First Orion. “When your iPhone rings, you will now know exactly who’s calling and why. With the number of spam calls getting worse all the time, this capability is more important than ever.

PRO Version – all FREE features plus:

PrivacyStar will soon be available as a FREE download in the Apple App Store, this comes with a 7-day trial of the PRO service. PrivacyStar also offers the PRO Version with additional features available at $0.99 per month. Customers who elect not to subscribe to the PRO version may continue to use the Free service once the trial is completed. PrivacyStar for iPhone will also be released in the United Kingdom later this year. For more information on the PrivacyStar application, visit www.PrivacyStar.com.

The PrivacyStar solution includes ScamBlock, Caller ID/YD with Robocall Detection, real-time caller ID and call blocking as well the ability to report abusive calls and texts directly to federal agencies. PrivacyStar is available as a free download for Android smartphones and iPhones and powers call management solutions for many leading mobile carriers. Each month, PrivacyStar blocks millions of calls and files hundreds of thousands of call complaints on behalf of customers directly with the Federal Trade Commission for Do Not Call, Fair Debt Collections Practices Act and TCPA (Telecommunications Consumer Protection Act) violations. PrivacyStar is a First Orion company. 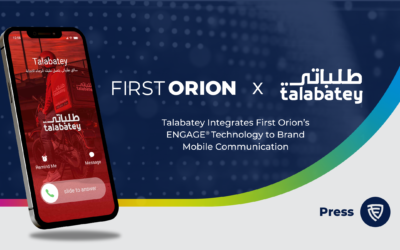 First Orion today announces its designation as an apprenticeship ambassador for the U.S. Department of Labor (DOL). The report results indicate that 93% of people want phone calls from their doctor, pharmacy, or other healthcare providers.